How does fire develop?

If you examine the fire progress over time, it can be seen that it often starts out small and slowly but then increases ever more rapidly as more fuel is involved.

How does this look like in a building fire? 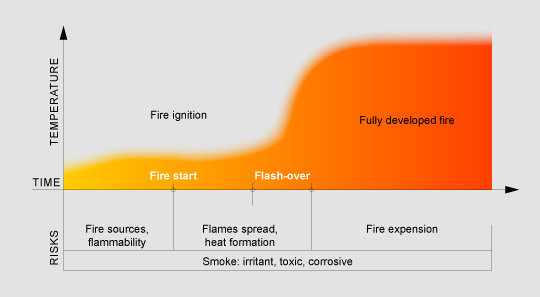 An ignition source ignites combustible material, which starts to burn, generating heat, and igniting additional material. The fire propagation is boosted by the increased heat release and temperature of the surroundings. The fire has grown to such an extent that the whole fire load in the room decomposes with the evolution of a flammable gas mixture. The gas ignition causes an extremely high, even explosive, fire spread over the entire room, called "flashover", which leads to the fully developed fire.

The fire now penetrates doors, walls, ceilings and windows and spreads to neighbouring rooms until the whole building is in flames. The room temperature exceed 1,000 °C and the entire fire load in the building burns. The fire has reached its peak and, depending on the fire load, it enters the decreasing phase in which the building is more or less rapidly burnt out.

Flame retardants act in the decisive phase of an initiating fire: they help to prevent ignition or flame propagation and thus flashover.